A look at Azns in media last month.

This blog had some discussion about whether the reality show modeled after MTV’s sleazy boozefest “Jersey Shore” would ridicule its Azn participants or allow them to, for once, shed their bookish images.

I think most of us are anxiously waiting to see if a network picks it up. If no network does, much as I hate the show’s concept, I would have to cry foul and call racism.

Contrary to what I mistakenly blogged about before, Golden State Warriors’ draft pick Jeremy Lin is not the first Azn-American to grace the NBA. Wat Misaka, a Japanese-American, joined the league in 1947.

However, Lin does join a very small group of Azns who have made it to the big leagues. Here’s hoping he has a long, successful career–and that he develops a signature jump fans can start calling the “Lin-dy hop.” (If this actually happens, you read it here first.)

A band member’s response to ongoing criticisms about the name:

“Growing up a child of a gay parent in a tiny town, a poor second-generation Italian girl, I also have experience with the nuances of language. And give me a break you stupid twats. By the way, ‘ching chang chong’ is what people in Germany call the game rock paper scissors, and stupid petty retards is what I’m calling you.”

Wait … your parent is gay so that makes it okay to be racist?!

Nuclear weapons! Ahmadinejad! Muslims! Apparently, Canada has a lot to hate about Iran. So much so that new sanctions against the country were announced July 26 in an effort to curb the possibility that Iran might eventually develop some type of nuclear-related weaponry.

“These sanctions are in no way intended to punish the Iranian people,” Prime Minister Harper promised in an official statement.

Change your skin colour or get out of this country

Sob. Sob. Sob. White people everywhere started crying “reverse racism” after Sara Landriault, a white woman, couldn’t apply for a federal government job because the application is limited to applicants of colour and Indigeous applicants. Cabinet minister Stockwell Day was prompted to announce, “We want to ensure that no Canadian is barred from opportunities in the public service based on race or ethnicity.”

WHAT THE HECK. PEOPLE OF COLOUR AND INDIGENOUS PEOPLES HAVE SAID THAT FOR YEARS.

The only difference is, we mean that people of colour, Indigenous people, differently-abled people and women who have the same (if not more) qualifications as able-bodied white men are systemically denied jobs because of arbitrary judgements based on their appearance.

And Day and fellow white male Cabinet minister Jason Kenney mean that the current employment equity policy (which, hello, is different from “affirmative action,” but neither has acknowledged this) bars white men (and sometimes women) from applying to 2 per cent of the federal government’s jobs. That’s 91 out of 5,000 jobs, according to 2008 figures.

The Tories are ordering a review of “affirmative action” policies. That will likely result in the designated “historically disadvantaged groups” being even more underrepresented in the public service.

Conservative Senator Donald Oliver speaks very eloquently about the need for employment equity. I can’t link to other articles on the subject … the comment boards are too terrifying.

Harvard Crimson point guard Jeremy Lin could be the first Azn-American in the NBA. He’s playing in the Summer League for the Dallas Mavs. ‘BOUT TIME PLAYAS!!!!!

The 2010 NBA Champs Los Angeles Lakers have the heart of champions, and the passion of young lovers it seems. 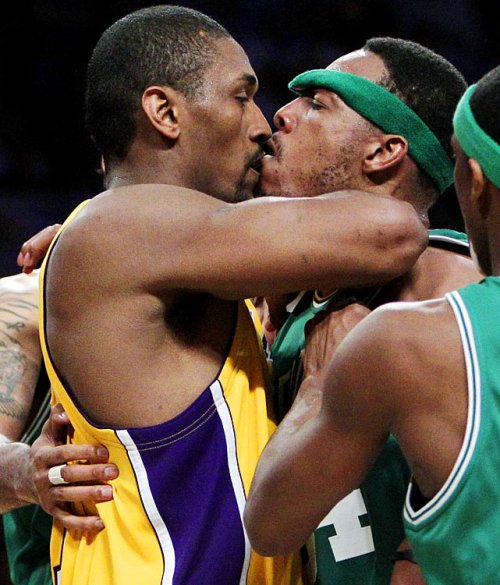 Though they may not have won it in 4 as I initially predicted, they were the classier team and allowed the Celts to have high hopes in hoisting Mr. Larry O’Brien’s championship trophy above their heads in all its glory, only to have all their hopes and dreams snuffed out and come crashing down in the dying minutes.

Once again, amazing, greatness, at least I score more than zero points *cough* Ray Allen *cough*, Kobe Bryant took it into his own hands and closed it out when it mattered (and when I say took it into his own hands, I actually mean relied on his teammates, for once, in the final minutes). I will admit, this series was one of the most exciting I’ve experienced in years, especially with it coming down to the wire in Game 7.

However, the better team always prevails, and it just so happened to be Kobe and Co. Congratulations on having one more ring than Shaq!

For all you Celtics fans, don’t be bitter. If Artest and Pierce can lead by example to kiss and make up, can’t we?

Can all my Boston fans please stand up? Thanks, all three of you.

If you’re part of the minority Celtics following, how about that Kobe and the Lakers tonight? Best part of the evening was when they showed Chris Rock sitting beside Kobe making jokes. Kobe’s response? There was none. He had the composure of a champion, unfazed, staring out at the court.

They say ‘Amazing is Belief’. I say: 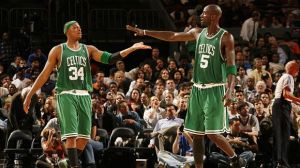 Sure, the Cs have kept us on our toes this season, playing brilliantly for periods and badly for inexplicable stretches. But was the Game 1 loss a sign of a return to the lacklustre? I don’t think so.

The Celtics we’re looking at today are better than the team of 2008—and, two years ago, they beat LAL easily in 6. There’s no reason they can’t do it again.

For the first time in a while, they’re healthy.

The Lakers lost in 2008 because they were soft. The only reason they won last year is because they weren’t competing against a team that deserved to be in the Finals—as the Magic proved this year. In two years, LAL has bulked up, but so has Boston. Gone are the finesse players like Eddie House. Now we’re looking at the Rasheed Wallaces stacking Beantown’s bench. With Perkins and Big Baby, we have a gritty crew in the post.

They didn’t deliver in Game 1, but it’s an anomaly for Boston to be outplayed in the paint. It sucks, but nerves happen. They’ll pick it up.

We’re also looking at supporting players who (finally) understand their role. Guys like Wallace and Nate Robinson, who stumbled through the regular season, seem to have found a comfortable rhythm in the playoff run. They’re not posting great stats, but they’re providing consistent backup play and spurts of brilliance where necessary.

And the best surprise of the season? Rondo. Hawt. Nuff said.